Under the guidance of health offiicals, we have established important procedures for resuming events at the Orpheum Theatre and Halloran Centre. Read all of the details.

In the modern setting of downtown Memphis’ Halloran Centre, Memphis Symphony Orchestra Music Director Robert Moody brings you inside the minds and music of composers to discover new connections and meaning to incredible works of art. So come spend an evening at Halloran, and experience live orchestral music with a unique twist only Robert Moody can provide!

The Orchestra Unplugged is presented in partnership with the Memphis Symphony Orchestra.

2020/2021 marks Maestro Robert Moody’s fourth season as Music Director of the Memphis Symphony Orchestra.  The MSO is enjoying great artistic and organizational success in this era; expanded and adventurous programming, the MSO’s first commercial recording in over three decades, and greatly improved financial underpinning are hallmarks of this success.  Moody is also Music Director of the lauded Arizona Musicfest, boasting one of the finest festival orchestras in North America.  Players hail from the top orchestras in the world, including the Vienna and New York Philharmonic, Philadelphia and Cleveland Orchestra, Boston, Chicago and San Francisco Symphony, and the Metropolitan Opera Orchestra.

A native of South Carolina, Moody holds degrees from Furman University and the Eastman School of Music. He is a Rotarian, and has served on boards of YMCA, AIDs Care Services, and Charlotte Master Chorale.  He is an avid runner, and now runs the St. Jude half-marathon in Memphis each year. 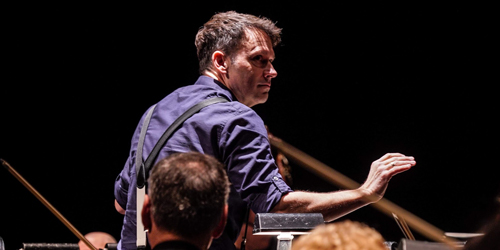 The Memphis Symphony and Robert Moody return to the Halloran stage to present a poignant exploration of music’s place in the continued work to which Martin Luther King Jr. dedicated his life.